England went into the 2014 World Cup with a good squad combining youth, experience, and one which was free from the hype that has surrounded previous “Golden Generations”. This might have been partly thanks to Hodgson, who showed as little ambition off the pitch as he did on it, playing down chances from the day England qualified.

England were handed a tough group on paper, but were given the chance to play Italy first. Notoriously bad starters when it comes to competition football, Italy defeated England with apparent ease, which is baffling for two reasons:

Italy scored just two goals in the tournament, both against England, but the way they used Andrea Pirlo in midfield should still have been a lesson to England, and Hodgson, on how to use Steven Gerrard.

The aging Pirlo was surrounded by runners in the Italy midfield. Defensive midfielder Daniele de Rossi tidied up behind him, with Marco Verratti and Claudio Marchisio sticking close to him in the middle, allowing Pirlo the freedom to play his game.

Conversely, Steven Gerrard was relying on Jordan Henderson alone to support him in midfield and Henderson, though typically tireless, wasn’t close enough to Gerrard to be effective in this role.

The WhoScored average position diagrams from the England v Italy game, with Pirlo and Gerrard highlighted, show how the two registas were used differently. 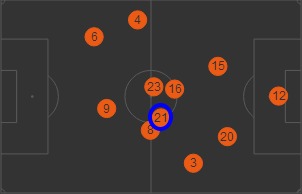 Average positions of the England team in the same game: 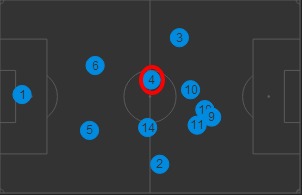 It’s not just Italy who use their midfield playmaker in this way, with France also making sure Yohan Cabaye has some support in the shape of Paul Pogba and Blaise Matuidi. Not only does it help the defensive shape, but also gives an easy short pass to retain possession if the longer or more probing through ball isn’t available.

At club level, Brendan Rodgers eventually realised that Gerrard worked best in a three rather than a two, using him in a diamond midfield or a 4-3-3. On some occasions Gerrard was so deep that he almost became an auxiliary centre-back, which prevented any frantic recovery running when possession was lost, and at the same time allowed him to use the defensive skills he does possess to help the centre-backs.

For England he was neither of these things. He found himself stranded in the middle of a Brazilian field with only Henderson for help, and that’s only if he could break the number 14 away from covering for Glen Johnson.

This said, Gerrard didn’t actually play badly during England’s brief World Cup. Coming in for the usual stick from fans of certain teams, he naturally shouldered more of the burden because he was captain. The fact that it was his header in the Uruguay game which led to Suarez’s opportunistic effort, also meant he came in for more criticism than some other players. For example, we also saw Phil Jagielka take up some, let’s say unfortunate positions, during the tournament, but the centre-back hasn’t received half the finger pointing the captain has.

Jagielka’s positioning, Gerrard’s loneliness, and Henderson’s Sisyphean shuttling can all point to systemic problems rather than individual ones, and other areas of the team show similar tactical weaknesses.

England’s best moment of the World Cup was the goal scored by Daniel Sturridge against Italy. Not because it stood out for any individual player, but because the team combined in such a way that it allowed certain players to play to their strengths.

Raheem Sterling showed his superb vision and passing ability to put Wayne Rooney through on the left wing. Rooney executed a perfect cross with his left foot to find Sturridge, who had managed to move ahead of his marker to the ideal position to receive it. Sturridge slotted home with his right and for a moment everything looked rosy. English players playing attacking football using their technique, vision, and weaker feet.

In the next game Rooney was moved to the centre, and Sterling played on the right wing.

All of the players in the England side have proven their strengths at club level. Even the much maligned Danny Welbeck has shown his use for Manchester United in the past, and merited a place in the squad. In Baines and Gerrard, England have both left and right footed set piece specialists who can cause havoc with their delivery given the opportunity.

Raheem Sterling looked better than Luis Suarez during Liverpool’s end of season run-in, and Jordan Henderson’s improvement during the past year meant England now have two water carriers of considerable talent, James Milner being the other.

Gary Cahill is amongst the best defenders in the Premier League, and useful to have in either box, whilst the supporting cast from the bench contained some solid technically decent back-up players rather than a group of wildcard hopefuls.

The one true wildcard was the exciting young Everton midfielder Ross Barkley, who should have the potential to change a game if given the freedom and confidence to do so. Roberto Martinez has demonstrated perfectly how the midfielder should be managed, but this is something both David Moyes and now Roy Hodgson have failed to do.

Right-back was a weak point in the England squad, as the England hierarchy paid the price for failing to introduce Nathaniel Clyne to the international set-up. Another mistake was taking the talented but injured Alex Oxlade-Chamberlain to the tournament, when his place could have been taken by the experienced poaching instincts of Jermaine Defoe. Even, dare I say it, by everyone’s favourite traditional centre forward – Andy Carroll.

Despite England’s miserable World Cup, in which they only collected a single point as a result of their goalless draw versus Costa Rica, the manager retained his job amidst little protest. Elsewhere, Italy’s coach Cesare Prandelli resigned after their poor showing, as did Sabri Lamouchi of Ivory Coast and Alberto Zaccheroni of Japan. They failed to meet expectations, so they resigned.

Hodgson has been assisted in his quest to get away from the 2014 World Cup quickly, and scot free, by Luis Suarez. The English media’s favourite villain had another incident of idiocy and now everyone is talking about that instead. Everyone has forgotten that England were even in the World Cup, and now Uruguay have been knocked out, the tournament has been deemed a success in England.

Everything except England need a new manager. Someone like Sam Allardyce.

Group D is seen as one of the tougher groups in this year’s World Cup, and it is hard to know for certain who will progress. England take on Italy in Manaus on Saturday as both teams kick off their World Cup campaigns. The two teams will be looking to get off to the best start possible as they find themselves in a tough group. England won only one of their three warm up games for the tournament, but friendly …

With the Premier League season just round the corner, the England squad announcements will start to come thick and fast, and it’s safe to say the fans are losing faith with the England team and selection process. Every so often though a player from outside of England’s top elite sides is called up to the international squad - this time it's Rickie Lambert's turn. As a player who has played the majority of his career in the lower reaches of …

England face Costa Rica in both teams final game in group D. England are already out of the World Cup after losing their previous games to Italy and Uruguay. Roy Hodgson’s men will be looking to salvage some pride by putting in a good performance and getting a favourable result. Costa Rica have already qualified for the knock-out stages to the surprise of many. They have beaten Uruguay and Italy in their previous two games, and a point against England …

Danny Welbeck splits opinion, even between Manchester United fans. Some would say that his lack of goals and clumsy, somewhat erratic style means that he is an overrated player. However, many would point to his hard-working, athletic performances and his ability to harrow a defence as signs that he is worth a place in both the Manchester United and England set-ups. Welbeck has made 19 appearances this season, 9 of which have come from the bench – more than any …

Could Andrea Pirlo be set for the Premier League?

The madness that the transfer window brings, and that every club will be linked with hundreds of players over the coming months making some rumours difficult to believe. However a player who could be headed to these shores is Juventus midfielder and social media favourite Andrea Pirlo, who has spoken out about his desire to leave the Serie A and experience a new league next season. There will be a number of clubs across the world interested in the midfielder, …