Manchester United ended up on the losing side of a cup final for the first time in close to 14 months – after an inspired performance from Real Madrid ensured their fourth Super Cup win and a remarkable second (consecutive times) under Frenchman Zinedine Zidane.

Even though the result was always under the control of the Spanish and European champions on a sweltering hot evening in Skopje, thanks to a battle comfortably won in the wide areas, the Red Devils produced a much improved display for most of the second half, aided by a formation change almost enabling United to claw their way back into what once seemed a lost cause.

As is always the case, the performance from United in various phases of that game raised a few important questions and offered some clues, if you like – ahead of the new season which starts Sunday at Old Trafford against a West Ham United spearheaded by an all too familiar face.

United lacked purpose for the majority of that first half after a bright start. Although it was largely down to the brilliance of Real Madrid in terms of their positioning, speed and precision with which they moved the ball across midfield and out wide often pinning United’s full-backs and wingers well into their own half, it’s safe to say that if there was a serious gulf in class between both the sides, it was most apparent down the flanks; particularly on the left-hand side where Paul Pogba and Jesse Lingard struggled to get a grip on the game.

The fact that United, after conceding early in the second half, picked themselves up enough to enjoy a dominant period for the better part of the remainder of the match, may not be coincidence, given the introduction of Marcus Rashford and the change of system to a more familiar back four.

But the reality is, besides Anthony Martial who was an unused substitute on the day – another fairly contentious decision made by the Portuguese with regard to team selection, United are short of genuine quality on the ball to cause problems down that side. Incidentally, it was the 21-year old’s quick feet and willingness to take men on in the friendly against Real Madrid that saw him set up Jesse Lingard’s goal, a solo effort that stood out as the standout moment, in an otherwise ordinary pre-season. There was none of that on Tuesday, however.

With the pursuit of Ivan Perisic coming to an abrupt halt, Ed Woodward should be doing whatever he can to work his way through bringing a left-sided attacking player that Mourinho is desperate to add to his squad and rightly so.

2. Nemanja Matic could emerge as United’s most important player this season

There were a few positives in the defeat; Romelu Lukaku getting back in scoring ways for instance, but none more encouraging than Nemanja Matic’s measured performance following a pre-season with his new club that lasted just over 45 minutes.

The settling in period is often tricky with new signings but with the 29-year old – proven in the league having won it twice, with a thorough understanding of what Mourinho demands of his players in different situations, it could not get any better for Manchester United, as transfers go.

The Serb was United’s best player by a mile – with 5 defensive actions and 50 passes completed in his competitive debut against a higher quality side, and the more he gets to know his colleagues, the better, particularly for the likes of Pogba and Mkhitaryan who could directly benefit from playing ahead of the former Chelsea midfielder, in which case their efforts could be concentrated further forward, in the business end of the pitch.

United’s primary issue in the last three campaigns has been scoring goals. Despite Zlatan Ibrahimovic’s reasonably prolific campaign with 17 goals in the league and 28 in total, the supporting cast failed to add enough to propel United any higher than they finished last season. 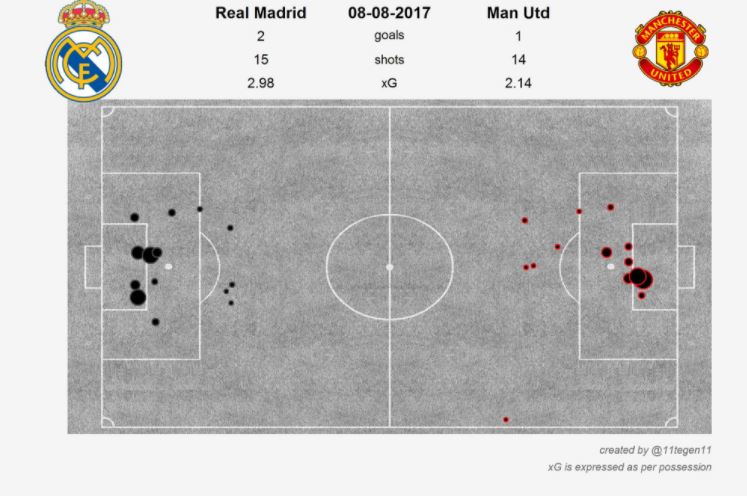 Lack of goals also saw the Red Devils draw far too many games in the league and especially at Old Trafford where they drew more games than they won. On Tuesday, a similar pattern emerged where United missed some clear-cut chances in crucial moments i.e Lukaku and Rashford squandering an opportunity each. Had one of those gone in, we may be talking about a different result here; fine margins.

But the shot quality of Real Madrid and Manchester United were certainly comparable which is rather reflective of United’s improvement in general. It suggests the Red Devils have used the ball almost as effectively, if not more than Zinedine Zidane’s all-conquering Real Madrid – with a set of players not nearly as experienced at the highest level.

All in all, Manchester United are taking shots from dangerous areas where the likelihood of scoring is higher, under Mourinho, which is always a positive, but the conversion rate needs to go up a notch if they want to score anywhere near the amount of goals they would require to mount a strong push for the title.

On February first, Manchester United will face off against Hull City for the second time in a week.  After advancing to the Capital One Cup final at the KC Stadium last week, despite losing 2-1 on the day, Manchester United will welcome Hull to Old Trafford on Wednesday. United had a good last week with an aggregate victory over Hull City to send them to the final of the Capital One Cup and a 4-0 win over Wigan Athletic to …

Another cup win. This time under bizarre conditions. Nobody fancies a cup quarter-final at the Britannia on a windy Wednesday night. Glad they got through it, all the more in convincing fashion. The score ended 0-2 to United with Darren Fletcher coming off the bench again much to the delight of the away fans who were raucous throughout. Looking at the season so far, Manchester United are in the knockout stages in the Champions League where they have been at …

Manchester United’s win against Derby County, although impressive, should not take the spotlight away from Van Gaal’s seemingly hopeless situation, and the amount of pressure on him. One win cannot take his past atrocities and the fact that he turned a team built on counter-attacking into a team that only plays defensive, “boring” football. However, at this point, it is crucial that United build on the result against Stoke. Stoke’s defeat to Crystal Palace would definitely make them want to …

With the dignity and professionalism that epitomised his lifelong career in football be it both as a player and as a manager, Sir Alex Ferguson this morning announced his retirement from football aged 71 with the Scot's final game being away at West Bromwich Albion on May 19th. Sir Alex Ferguson having just secured Manchester United's 20th league title and the 13th in the Premier League era told his players this morning that he would be retiring at the end of …

Manchester United are returning to Premier League action for the first time since their EFL Cup triumph and there should be a jubilant atmosphere at Old Trafford to greet them. During recent weeks, Liverpool have dropped points and there is an opportunity for United to put the pressure on them and Arsenal before the late game on Saturday. Those that have watched a lot of Jose Mourinho's side in recent months will consider them as serious contenders for a top …